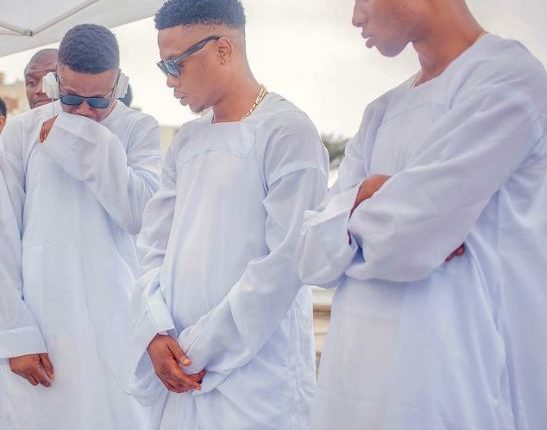 Vector Crying During The Burial

LAGOS – One of Nigeria’s finest hardcore rappers, Olanrewaju Ogunmefun, popularly known as Vector Tha Viper, has penned an emotional tribute in memory of his late dad.

The rapper’s dad, who was a police officer, died in July 2017. Today, Monday, July 5, 2021, the rapper posted an emotional tribute to him, with an emotive photo, recalling some of the legacies he left behind before his death.

He wrote; “I had a court case at a time, I lost everything I had (and I hate asking for help from anyone, even my own parents).
My Dad walked into the court room on the day set for hearing and my lawyer in that case lost his shit. “That’s the man I was telling you about all these years” he said to his partner next to him.”

“His friend was killed in a failed brake accident in Ibadan (I think) and when they got there, they were going to shake the driver with all their might and connections but my dad welcomed them in his office and asked if he could read them some Bible passages before they commenced discussions.”

“They left the office letting go. He didn’t see my dad anymore till the day I had a court case he represented me in and my dad walked in.”

“I learnt about resting in peace from the life my dad lived. To say “rest in peace“ is a lie if the person who died didn’t leave good memories of him/herself.”

“If you wonder where my confidence comes from, it is in knowing the son of whom I am. You have seen me smile many days, see me cry, today is different.”

Rotimi Agbana is an experienced Journalist with a number of years on the hallowed profession. Having obtained a degree in English & Literary Studies from Kogi State University, Anyigba, he proceeded to obtain series of trainings in journalism/communications. Being an entertainment journalist of repute in the Nigerian entertainment industry, he has worked closely with the likes of Wizkid, Davido, Don Jazzy, Tiwa Savage, Omawumi, etc. He was previously an entertainment reporter with Vanguard Newspaper, before joining Independent Newspapers Limited as the Deputy Online Editor.

This site uses Akismet to reduce spam. Learn how your comment data is processed.

Senator Bola Tinubu’s call for his supporters to seize power at all costs: Atiku

Television Nigerian is your news, entertainment, music & fashion website. We provide you with the latest news and videos of current happenings across the globe.
Contact us: info@tvn.news, Hotline: +234 907 726 0922
© Copyright 2018 - Television Nigerian
MORE STORIES
Politics